The Escamp district is one of the biggest suburbs of the government city Den Haag. It has a lot of neighbourhoods looking just the same filled with 4 floored apartment flats from the 1930 – 1960  (architect Dudok) in blocks of streets but also with lots of green between. Now they are breaking them off, renovate, building new houses and whole new neighbourhoods. There are tensions between the people that are natural born and grow in Den Haag and the new coming people with a lot of different nationalities  (mostly living anonymously in the oldest cheapest buildings).

As part of the “Expedition” the local art centre Het Koorenhuis asked me to created a community art project. I started with soundwalks (as part of a little research of the sounds of Escamp) *, took pictures and interviewed people on the street.

I decided to choose the theme: “sea” because Den Haag and Escamp are located just near the North sea and almost all the people living there had experienced   the sea in Holland or in the country they were born; almost everybody can imagine the sounds of the sea and memorize about it. (it’s not a  “we – they” theme but a “we” – theme).  I was also inspired by the sea-chapter in the book:   “The tuning of the world”  of Murray Schafer. 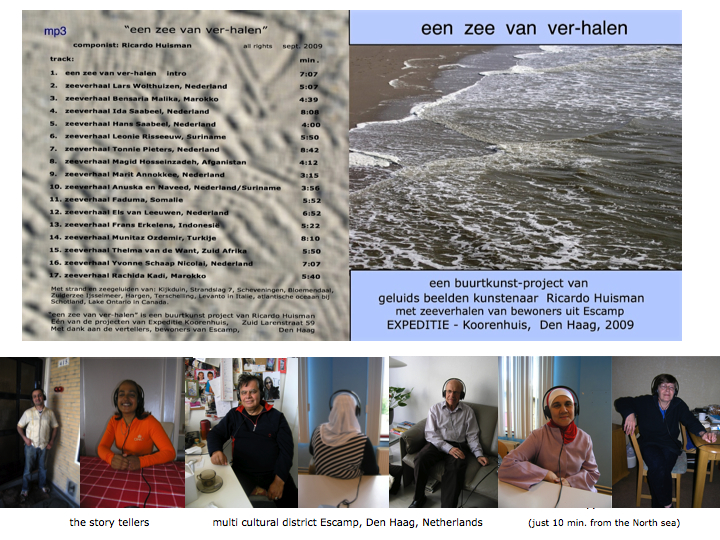 As a sonic intervention I was at randomly ringing doorbells and bringing binaural recordings of the sea  (from several places near Den Haag, in Holland, Europe, Canada) at the front door. Asking the inhabitants to take the headphone and listen to the sounds of the sea. After that we talked about the importance of (living near) the sea, about memories of the sea in the countries they were born, about the different  sounds the sea(s) can make and how they experienced this.  I’ve recorded  these stories and reactions and created new sea soundscape stories with them.

fragment of the sea story of women from Marocco (Dutch)                           about going to Marocco on the boat during holidays, happy visiting family and mother, children laughing and playing, waves translated “amwaj”, looking to the waves when feeling sad makes me happy again, when I was 6 years….

It was great to capture their voices as part of the contemporary dialect of the Escamp district. Because of language problems and rules of religion it was not always easy to capture the stories of the Islamic people, but I succeeded after visiting a women group in the local social centre. 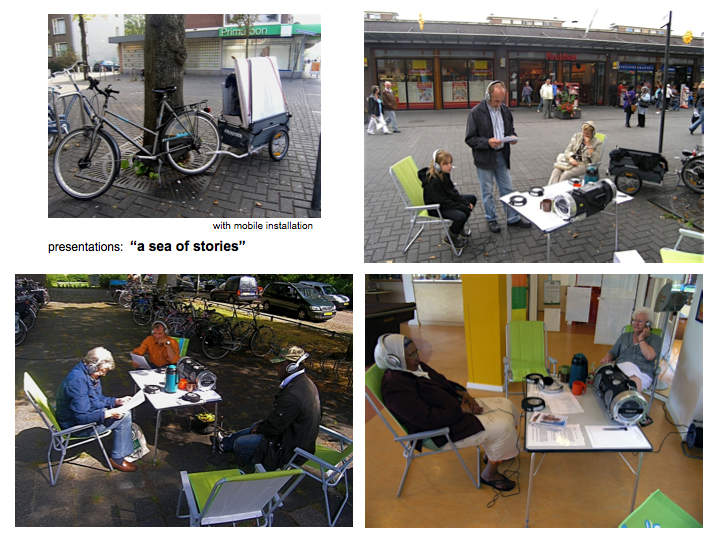 I have presented the “zee van ver-halen” as a mobile installation. A holiday setting with a soundblaster for the sounds of the sea as background, portable cd-players with headphones to listen to the personal sea stories and corresponding photo portraits of the storyteller. There were a lot of positive reactions  of the people who took the change taking a headphone to listen to the sea soundscape stories. Lots of people, young and old, were “touched” by the personal stories of their fellow inhabitants and listened to a binaural soundscape for the first time in their live.  It was food for new thoughts, sharing, listening and story telling. It gave them a change to get an-other and more personal image of their neighbours, the inhabitants of Escamp.  The soundscape stories triggered a lot of (sound) memories about the country of origin, their sonic heritage, holidays, traveling seas and oceans in past times, migration, etc.

*  I recognized that the centre streets of the blocks of flats a beautiful “silent”  acoustic space with birds etc. because of the blocked traffic noises from  the  bigger main roads.  A quality of silence you don’t expect immediately in the big cit like Den Haag. Back in 1930 they also recognized it or planned it because they build the schools in these areas  (introducing the sounds of children at specific times). After 1950 there was a growing mobility (car noises,etc.) on the main roads. Nowadays Den Haag has city soundmaps with the amount of db the train is making in a certain area, etc.