The “woollen sound pill” is a woollen sound sculpture in the shape of a medicine capsule but it can also seen as an abstract shape, depending on the context in which it is presented. The “woolen sound pill” produces soundscapes with sounds of gongs, birds, sheep, frogs, water, machines, crackles, etc. Some parts of the soundscape compositions are recognizable as concrete sounds corresponding with “known places”; other parts have a more abstract quality with several soundlayers evoking imaginairy spaces. Because of changes in loudness, sudden clearness, contrasting frequencies anf changing contents the woollen soundscapes are creating a new (sound)space in each indivdual place, more or less intertwined with the existing surrounding sounds sensed by the public, who are auditory performers as well. The sounds of the “woollen sound pill” are hearable reflected in the space, but also touchable; the resonances and vibrations through the woollen material can be felt in different nuances: “touchsound”. The pure woollen blanket-material  can also be understood as a methaphore for home, security, safety, earth-related, matter, warmth, intimacy, privacy and a carrier of energy, memory, dreams.

In presenting the “woollen sound pill” there is always a combination in its perceptual being in the space: the physical, touchable, woollen sound sculpture in the here and now and the imaginative soundscapes that allows the public to associate / dissociate, to “travel” in time, memory and imagination. In a way the “touchsound” can mediate between time and space, between the tactile sound sculpture and the imaginative soundscape,  by giving the public a direct haptic feedback of the sounds to their body.

The “touchsound” can be sensed as just one element of the translation of (imaginative) soundscapes to our body and brains, as a form of non-articulated haptic language, although it can be trickier to articulated thougts and one’s imagination. The heared reflected soundscape with concrete and abstract sounds contain narrative ellements and can challenge a direct articulated interpretation  but can also feed the imagination.

The interesting question is: what is making sense?  The making of sense as a complex translation of parcels of all kind of information gathered by our senses in a certain time/space-constellation. The way we translate this information has to do with our personal (un)consciousness and collective (un)consciousness of being and acting in that specific space (for example  in a chemist’s shop), our intentions for that moment and place, our being connected to the (sound) habitat, etc.  Maybe it is easier to talk about experience, about how we experience the “woollen sound pill” in that specific place, an experience in which we can share the personal, privat, collective and public. As an artist I’m also interested in what is not making sense in a way to open up space for questions and for new experiences.

The “woollen sound pill” is presented as a  tactile sonic intervention in the public space. It has a democratic quality: you can watch it, touch it, listen to it, or you can (try to) ignore it, you can walk around it (better not close your eye’s when it is hanging in the middle of the chemist’s shop). It is also more difficult to close your ears for it: you will hear it because the volume and frequencies are not at a constant sound level: suddenly they will be there loud and clear after been subtle part of the surrounding sounds for a little while.  The “woollen sound pill” is not meant to “manipulate” or influence the public on a unconscious level like Muzak or backgroundmusic, as used in a lot of shops and other public spaces nowaday’s. The “woollen sound pill” is clearly present and accessible in these spaces, inviting the public to experience the woollen touchsound in a playfull manner, challenging their meaning and understanding of such spaces. Maybe they like it or not, maybe it calms them, maybe it activates them, inspires or irritates them, it provokes the sharing of these experiences.

The “woollen sound pill” as medicine.

Perhaps the “woollen sound pill” is capable of bringing the soundscape and surrounding sounds to a more conscious level and giving the public the possibility of acknowledging a meaning about the quality of the surrounding sounds?   Maybe it can bring us to consciousness that we are part of the sound habitat as well. In this way the “woollen sound pill” can be like a medicine for our sound habitat. (with reference to the idea’s of sound ecology of Murray Schafer) 1.

When touching the “woollen sound pill” the public becomes also part of the soundscape in a tactile way. By hearing and also feeling the soundvibrations of the soundscape it offers a more intensified listening experience.  In the medical field there have been investigations in the effect of sounds and music on the human body: its use in music therapy, and also the specialsist field of vibroacoustics (related to the body), mostly used for people with (mental) disabilities. As an artist I ‘m interested in the effects of touchsound for all people within the public space. I like to investigate how sound is related to the visual, the haptic, the hearable, how we can sense our surroundings, our being in a place, how our brain and body is collecting information for experiencing the touchable and hearable sounds in a way that it is making sense – or not. 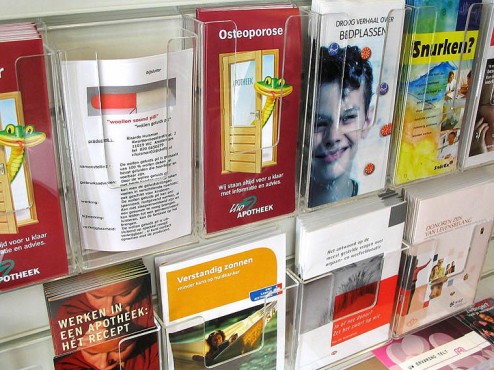 Self-help material at the chemist:instructions for the “woollen sound pill”

Reactions to the “woollen sound pill” at the chemist’s shop

Members of the public visiting the chemist’s were mostly surprised, sometimes even confused and left wondering how to interpret the “woollen sound pill”.   After reading the prescription-paper, or asking questions of the chemist’s assistents a lot of visitors touched the “woollen sound pill” and experienced the touchsound. Sometimes they touched quickly yet seemed confused, while others were sometimes irritated. In other instances people  were playfully surprised, or they were really curious, enjoying the sounds and the vibrations for a long time and coming back again (after receiving their medicine at the counter) wondering how different sounds could be felt. People talked about its usefullness and imagined the origins of the sounds they experienced. One man said: “this is the sound of a child in the womb of the mother” in response to a more “abstract” part of a soundscape. A women: “I can feel the noises of the sea and hear the seagulls” and started a conversation about the seagulls swarming around the square of the shopping centre, catching a good meal of the flying-ants in that particular periode. An old Indonesian woman recognized the gongsounds and felt comfortable when touching the “woollen sound pill”; it triggered memories of her homeland.

It was not always immediately clear that the sounds were coming from the “woollen sound pill”; people looked for birds inside the shop or sought out where the sound of the “car” was coming from. There were different reactions of the people working at the chemist’s shop. One assistent working at the counter was getting a little irritated when the shop was full of customers. Another assistent said: “I will miss it because it remembered me of my holiday’s. The chemist’s were enthousiastic about the different reactions of the public. Together with them I decided were to hang the “woollen sound pill” in the shop: before the window or just in the middle of the room depending on the acoustic of the space.

By moving around and touching  the “woollen sound pill”. The public could experience what I call their own  “multi sensorial hearing perspective” (more)

The sound history of the chemist’s shop

Presenting the “woollen sound pill” in another place/context.

This reconfigured storytelling prompted by the “woollen sound pill” will visit a second old people’s home in the future, so creating the possibility of exchanging stories, memories, associations of the old people in a touchable way.