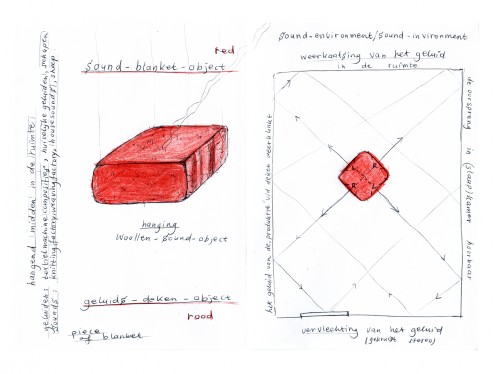 The soundscapes coming out of this piece of blanket were reflected by the walls of the square room when not absorbed, reflected, changed by the interacting public who could walk around and touch the woollen sound object, hearing and feeling the sounds of the origin: the production process of the “red woollen blanket”. It was if they entered an old blanket factory while hearing and feeling the rhythmic vibrations of spinning, weaving machinery reflecting the sonic heritage of Holland with its important textile industry and large blanket factories, like the “red blanket factory”, until the end of the seventies in the past century. The installation triggered memories and stories about working in and living near textile factories, woollen blankets at home.

: Listen here to a sample of "red blanket factory"

The third sleeping room was a separated one for meditation. A “red blanket sound bar” was hanging near the wall easily to access for children or adults sitting on a chair. They could hear and feel soundscape compositions like: “factory meditation”, “spinning silence” or “counting sheep”: factory soundscapes mixed with gong sounds, sheep sounds , etc.   When the door of the sleeping rooms was open the sounds were mixed with the sounds from out side the Brotherhood house including the sounds of sheep in a little meadow. 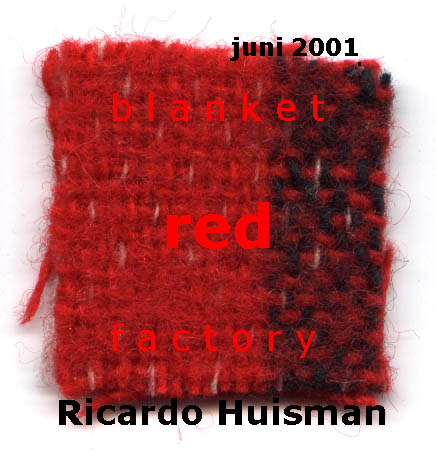 You can buy the full album on my Bandcamp page     here!

The soundscape reflects the sonic history of machinery in the 19th century: from hand weaving machine, driven by steam machine, to electric spinning-, weaving-, and knitting machines recorded in the Dutch Textile Museum and in a knitting factory in Hawick, Scotland, Borders.