2007, 2008, 2009  I’ve realized “The Oracle of the Noorderpark” – installation / project  including several follow up projects and activities.

“The Oracle” is located in the Noorderpark, a new park area in the North of Amsterdam which they are going to “rebuild”, connecting two parks by bridges over road and waterway.  There is also coming a North South subway line  under and through the park, new cycle roads etc.

“The Oracle” is  is a mysterious big building tube rising from the ground in the park with soundscapes: noises and voices coming out of it. I’ve composed special 4.1 multi channel soundscapes coming out of a large building tube: a mixture of ecological park soundscapes, subway station soundscapes, reactions and stories of the park users about their park and the changes in the coming years. The public could listen to the sounds and the stories and sometime feeling the vibrations of “the metro’s passing” while standing close to the Oracle or touching the tube.  There was a smaller tube about 20 meters further connected in the underground with Oracle. It could be used for giving reactions or talking to the person who is listening to the Oracle at same moment.  The park visitor could listen to the soundscapes with stories or become an Oracle them self: reacting on the stories heard, telling their friends a secret, their child a fairy tail, bringing a poetic message, or just mixing their favourite mp3 music with the soundscapes, … 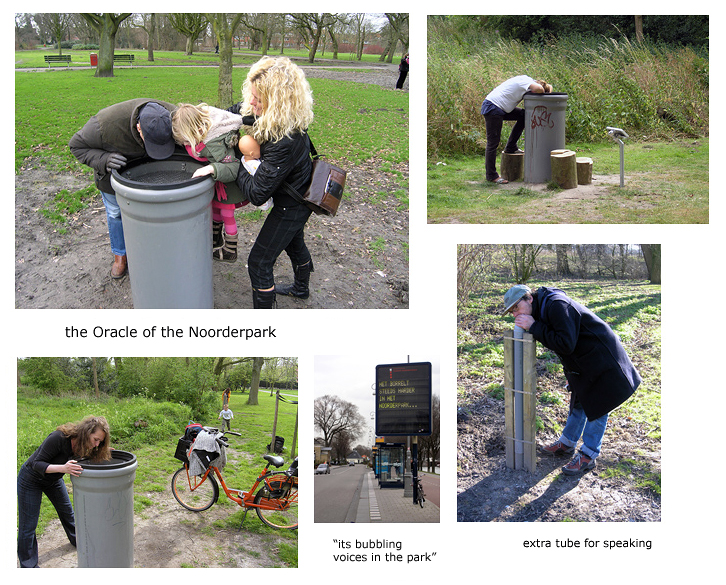 The project started with bubbling soundscapes mixed with secret voices coming from far and deep below the ground, followed by mysterious press messages on local websites and newspapers  about a tube with strange noises in the park recognized by the builders when doing there work…… It rendered speculations about an old pace under the park, some park visitors thought that there was already an underground connection with Amsterdam Central Station and that they were secretly testing the subway….. others thought it was a pump for a building block next to the park or it had to do with the new park pavilion: de Noordrparkkamer, a lot of visitors where just curious what was happening in their park.

After a month people could hear the compositions with stories of the park users and their reactions about the changing of the park and the coming of the North South metro in north of Amsterdam. Sometimes happy with the changes or very critical about the costs.

You can listen to some reactions here: (in Dutch)

You could hear a frog concert in June (as if there was a connection with the pond in the park), a bat’s- dance with detected sounds of the local bat’s and other ecological compositions, the stories of the owner of the little boats in the canal, stories of park visitors, a subway station and more on changing times suddenly “given back” by the Oracle.

The Oracle gave the park visitors a voice about the changes of their park, a way to become more aware of the sound habitat of the park and a playful way to become a creative performers them self. 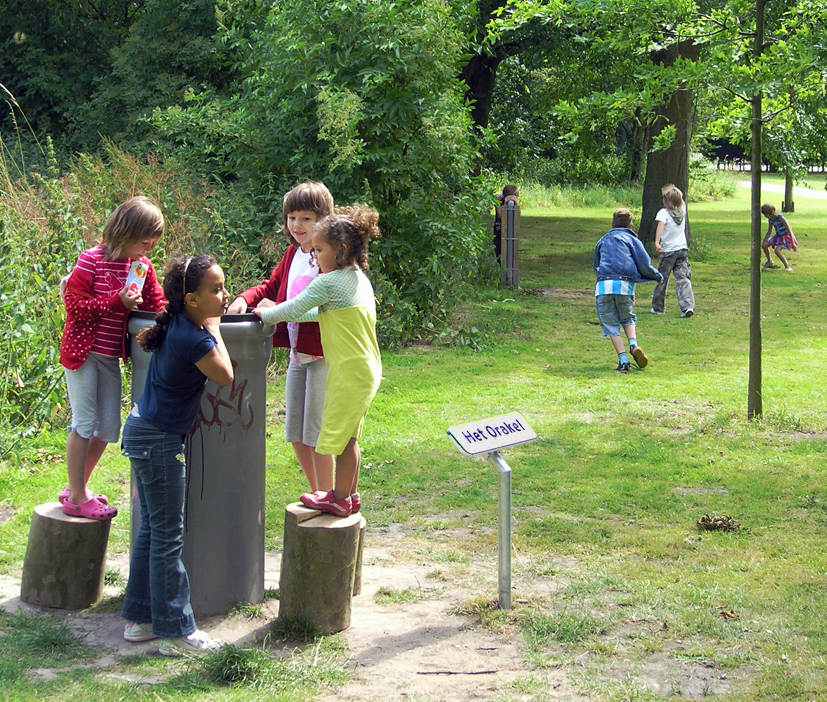