The “woollen sea sound sculpture” was  presented in the city Scheveningen at the Dutch North sea shore during the Mute Sounds kids festival for children and their parents.

By sitting on the back of “woollen sea sound sculpture” the public became part of an immerging touch-soundscape of the North sea while hearing and feeling the sounds of animals, fish and ships: seals, little dolphins, herrings, cod fish, porpoise, etc.

It was meant as playful introduction to the underwater sound habitat of the North sea and to become aware of their own “multi sensorial hearing perspective”. (artistic research)

The deaf and hearing disabled children and their parents could feel the sound of the fish; for example the relative low sound frequency “plubs” of the “jumping” herrings or the cod fish. 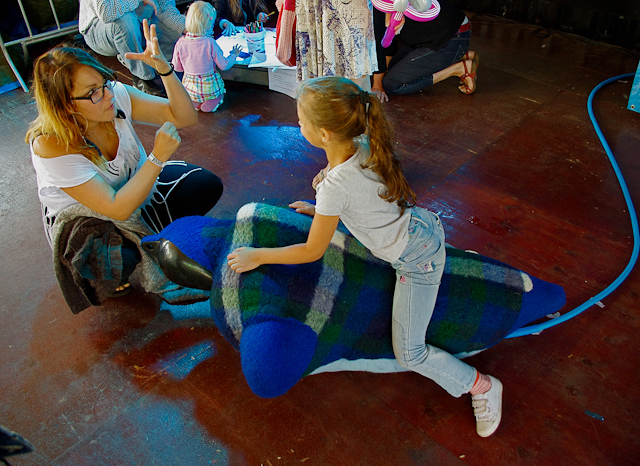 “Is this really the sound of a herring in the North sea “!?  There was a sign interpreter to explain what they could feel but also to communicate and share their experiences with other hearing people.  It triggered some talks about the ships and other human made noises in the sea.  After experiencing sounds from the North sea or becoming calm and quite when getting in touch with imaginative singing humpback whales in the ocean the children and their parents could sit down and draw or write together. 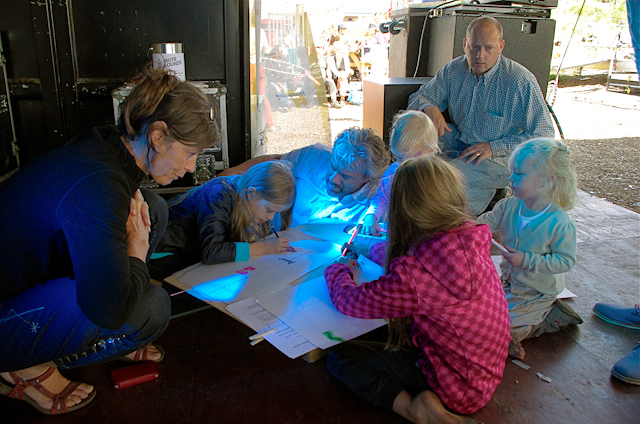 The “woollen sea sound sculpture” produces a four channel touch-soundscape with “head” and “tale”, while the child with parent could sit in the middle on the back of the imaginary woollen sea creature.

You can listen to a stereo version of the North sea soundscape here:

In summer 2015  I presented the “woollen sea sound sculpture” on the Babelut festival (link) in Neerpelt, Belgium. It is a music and theater festival for babies and toddlers with their parents.  The tactile sea soundscapes were appreciated by the very young ones. Later on that year on the Dutch Music Theater festival “2 Turven Hoog” in Almere.

In 2018  presenting the “woollen sea sound sculpture”  with  “sense animal” at the     Electronic Extravaganza festival, (by Steim and Monotak collective) at Splendor, Amsterdam