With the “woollen sound pill” I’ve visited  old people care centres. “Bringing around the woollen sound pill” and visiting the people in their personal space. The old people were emerged by the composed soundscapes of for example all kinds of transport: trains, cars, horses, a sunday on the country site, visiting a cathedral, the harbour, a factory place, etc.

The “woollen sound pill” caused talking about medicine, mobility, daily questions of life, about religion, the church,  the children and rendered lots of memories of past days. For instance they could hear and feel the sounds of the train; it was triggering memories of long journeys, holidays, family visits, etc. The “woollen sound pill” as “multi sensorial interface” was triggering memories, (sound) images, associations and story telling. As an alternative methode for reminiscences.

The idea of the “woollen sound pill” in this project was to make sound stories touchable; 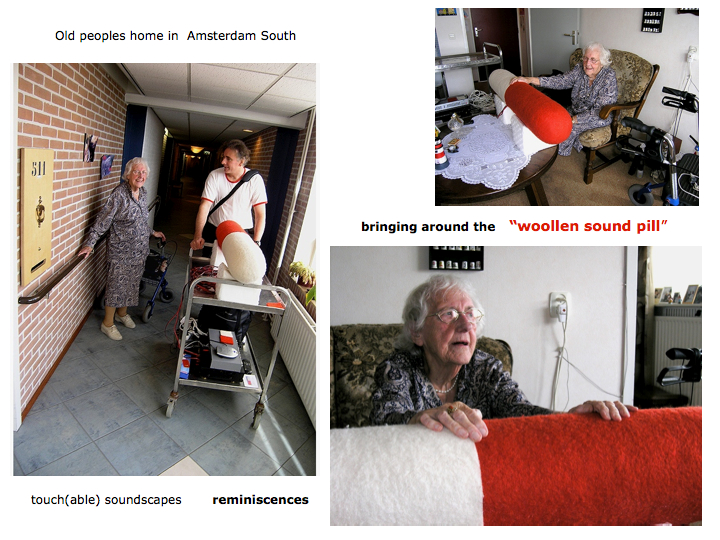 The stories of the old people were carefully mixed with the soundscapes and later hearable and touchable presented in the restaurant of the old peoples home for all the inhabitants, workers, friends and family, neighbours and in a smaller room for people with beginning dementia.  The presentations of “woollen sound pill”  presented together with photographic portraits of the story tellers were  triggering lots of memories, discussions, associations and shared sensations. 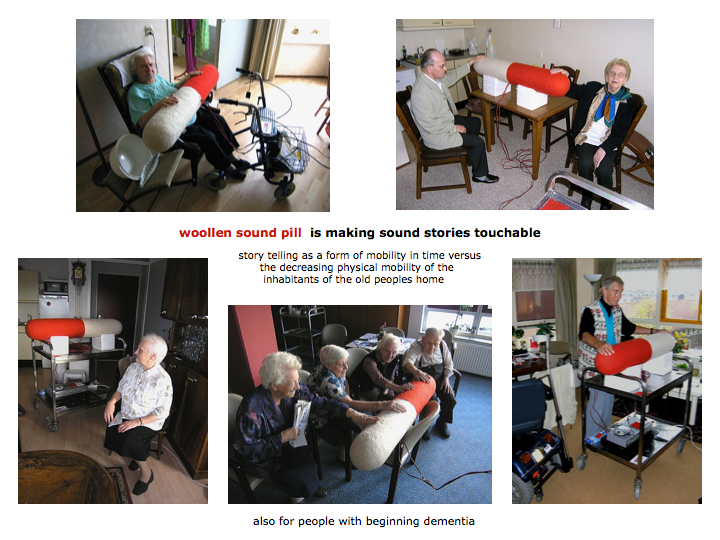 Sound example: When listening to the sounds and feeling the resonances of the train station and passing trains a man remembers as a little boy visiting his grand father who was signalman in a small signal building near a railway crossing (in Holland a disappeared profession so the sounds became part of the sonic heritage). His grand father was handling the big levers for the railway switch and as a little boy he was allowed to help him. “That was very interesting…”

The soundscape of the small signal building was designed afterwards.

for people with beginning dementia:

For the people with beginning dementia and short memory problems the multi sensorial experienced soundscapes were triggering their memories and seemed deepening their stories about their past afterwards. For example an elderly lady got a memory about the horse and carriage of the farmer who was collecting thrown away vegetables in the city streets to feed his animals (in Dutch: de schillenboer). When I was interviewing her afterwards she repeated saying: “and the farmer was coming along”…. but every time it was followed by another memory about the horse and the farmer, deepening the whole story.

also for elderly people suffering of  deeper stages of dementia:

In 2011 I had a follow up with touch soundscapes for elderly people suffering of deeper stages of dementia.  Beside some narrative soundscapes I also presented touch soundscapes which triggered lesser narrative associations but more relaxing, refreshing/activating sensations. They were meant to trigger sense memories and a calming, joyful, exiting experience for the people in that specific moment. For some people with already a deeper stage of dementia and suffering loss of words and language it slowly brought back some words about memories of the past: after a while experiencing the touch sounds one man told me slowly with just a few words that it remembered him being a sound hunter for his small films in past days. Other people with even a deeper stadium of dementia responded with a smile while calmly experiencing the touch sounds.

A reminiscences workshop / project for vulnerable elderly people  and people with several stages of dementia in care centre Polbeek, Zutphen.

Together with the inhabitants I have created toolkits with soundscapes (with and without personal stories), collective memories, portrait pictures and visual memory collages made by the participants with help if needed. A project rendering feelings of respect, lots of stories, interaction, working together, helping each other, awareness and joyful moments on different levels. The toolkits with soundscapes/portraits of inhabitants and visual memory collages could be used later by workers or family members.

The project was granted by Humanitas, Zutphen, Netherlands